On Wednesday 20 June 2018, VESPACE, with support from Ouest Industries Créatives and Centrale Nantes, took a great leap forward, with a first working session with virtual reality at the Opéra de Nantes. VESPACE has set itself the goal of recreating the atmosphere and mores of the 13th Century through a multisensory, digital experience. This is a joint project between the Laboratoire des Sciences du Numérique de Nantes [digital sciences laboratory] and the literature laboratory l’Antique, le Moderne.

The focus of the day was on recreating avatars to populate the project’s virtual space and on clarifying details about their costumes. The project team, Françoise Rubellin (University Professor, AMO laboratory), Paul François (VESPACE doctoral student at LS2N, supervised by Françoise Rubellin and Florent Laroche), Killian Poinsot and Charlotte Dubosc (both interns at the LS2N laboratory) visited the Opéra de Nantes to meet with costume designers.

Using the laboratory’s mobile virtual reality platform, each designer was able to get close to 3-D models of the avatars to comment on the work carried out so far, share their undeniable expertise, and rapidly identify areas for improvement. Virtual reality immersion thus served as a tool to capitalise on their knowledge.

It was possible to quickly alter costume length and shape, while the team supplied new sources to broaden the range of references. The Opera’s make-up team offered feedback on the models’ hairstyles, which were the fruit of an intensive exercise in reconciling historical accuracy and visualisation capacities in real time. 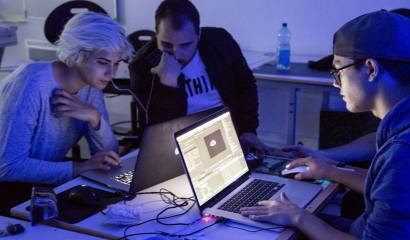 Module on devices for digital mediation

This educational module develops on the "Book in Five Years Time" cycle. It engages students on professional diploma courses at ...
Projet 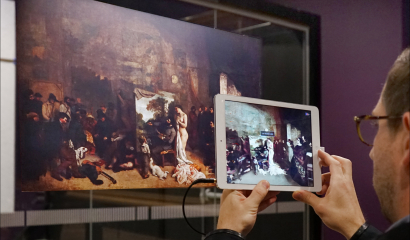 The VESPACE research project and thesis (École Centrale de Nantes/Université de Nantes) began in November 2017. Its objective is to ...