The AmbiDYS research project (LS2N/READi Design Lab/Mobidys) focuses on the detection and visualisation of textual ambiguities which could cause problems for learners with reading difficulties (in the context of using digital tablets). Various types of textual ambiguity are studied from a phonetic, lexical and anaphoric viewpoint.

Winner of the 2016 call for research projects

in partnership with the startup Mobidys

The AmbiDYS project investigates the detection and visualisation of textual ambiguities that can cause problems for learners with reading difficulties. Our application context concerns digital tablets, to improve the reading experience of digital children’s texts for children with dyslexic disorders. Different types of textual ambiguities will be considered: at the phonetic level (e.g. the word “son” can be either a singular or a plural noun and is not pronounced the same in both cases), at the lexical level (e.g. frozen expressions such as “take a jacket”) or at the anaphoric level (as in “he is talking”). Once the ambiguities have been detected, the team will study the visualization of these ambiguities within an adapted interface, by proposing new interaction modalities by combining gestural, sound, vibratory and visual interactions.

The detection of impersonal pronouns “he” is based on rules indicating the contexts in which the pronoun “he” is impersonal. The selection of the right referent for each subject anaphoric pronoun is based on the Mitkov algorithm which assigns a score to each candidate referent, chosen among the noun phrases present in the 2 sentences preceding the pronoun. The methodology used for the development of the ambiguity visualisation prototypes follows an iterative principle.

For the detection of textual ambiguities, the team concentrated on anaphora. Anaphoric pronouns and their nominal groups were annotated in six children’s texts by a 4th-year speech therapy student. Two computer science Masters students worked on distinguishing impersonal pronouns from anaphoric pronouns and on resolving anaphora for the French pronouns “il” and “elle” (which can mean “he”, “she” or “it”). They also developed a method for assessing the difficulty of resolving anaphoric pronouns, taking into account the distance between the pronoun and its referent, the number of referents and the number of characters amongst the possible referents. Initial tests have shown promising results for distinguishing between impersonal and anaphoric pronouns and for anaphora resolution. A student internship in visualising ambiguities is currently under way at the READi Design Lab.

Solen Quiniou, Béatrice Daille. “Towards a Diagnosis of Textual Difficulties for Children with Dyslexia”, LREC 2018 (Language Resources and Evaluation Conference) – under submission

Phase 3: dissemination of results by publishing scientific articles and taking part in conferences and exhibitions

The project could be expanded to include the development of diagnostic tools for assessing difficulty levels in texts or parts of texts, based on detection of the ambiguities present. The team intends to submit a project proposal with a more extensive scope, including a thesis on computer science and design, at RFI West Creative Industries’ next call for projects. In the longer term, there are also plans to submit a project to the European Commission funded Horizon 2020 initiative. 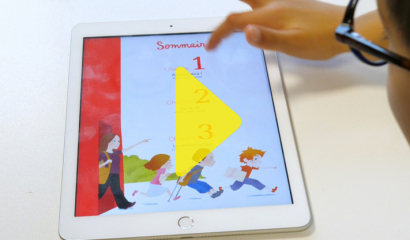 Reading offers an access to culture and knowledge that is often denied to dyslexic children or at the very least ...