What if autistic teenagers could improve their social interactions and regain their autonomy thanks to robots? This is not science fiction, but rather what the very encouraging results of Rob’Autisme, a research project currently entering its fifth year, seem to promise.

(c) Photo Service of the University of Nantes

Some 24 teenagers took part in the first four programmes of this one-of-a-kind project led by the association Robots ! in partnership with Centrale Nantes. The project was originally born out of a collaboration with Stereolux and Nantes University Hospital from 2014 to 2017. Since 2017, Rob’Autisme has added new partners to expand the project and consolidate it scientifically. Thus, West Creative Industries co-funds with Centrale Nantes the thesis by Rénald Gaboriau initiated in 2017 and co-supervised by Sophie Sakka (lecturer-researcher at Centrale Nantes, LS2N (Laboratory of Digital Sciences of Nantes), and founder of the association Robots!) and Didier Acier (professor at the University of Nantes, clinical psychologist and psychotherapist). 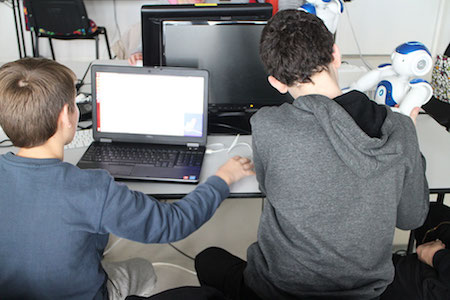 Over the course of twenty work sessions, autistic teenagers follow an original therapeutic programme: they learn how to programme a Nao robot (SoftBank Robotics), its voice and movements, so that it “enacts” an existing text in front of an audience. During these sessions in groups of six, supervised by Sophie Sakka, Rénald Gaboriau and three trainee students from the speech therapy faculty of Nantes University Hospital, the teenagers learn to define the other and the self, and to co-construct a project through their robot “prosthesis”.

Each exercise ends with applause for the presentation of the collective work, introducing the pride of recognition within this micro-society. Where a “companion” robot would incite the child to do things, the “extension” robot designed by Rob’Autisme serves as a communication vector, making it possible to experience doing things with and for others. The first year of the programme ends with a public show, with the performance of a robot actor alone on stage. For the autistic teenagers who continue the project for a second year, the aim is to write their own story, again with a view to putting on a public show at the end of the programme. Several robotic characters then become actors and must be programmed to interact together.

Sophie Sakka, who works on the link between human and robot, insists on the fact that the therapy is done by the human, with the robot vector helping the teen to express him/herself. The research project tends to show that the robot makes it possible to obtain much faster and more lasting progress than with traditional therapy. As a result of the programme, the teenagers open up to group activities. Six of them even resumed previously interrupted schooling. The real progress observed is a great relief for the carers, parents and relatives. In 2018-2019, two groups of teens participated in parallel in the programme in order to accelerate the generalization of the very positive results obtained by Rob’Autisme.

A research project to consolidate the therapeutic approach

The research focuses on analysing the mechanisms underlying the excellent results observed empirically over the first few years. To do this, each session is filmed and then meticulously analysed by a student from the University of Nantes in order to harness the statistical tools necessary to validate the hypotheses put forward. The next step involves formalizing a therapeutic protocol that will allow replication and the widest possible dissemination. This work has already been the subject of six scientific publications and further publications are planned until 2020.


For more information on the project : http://www.association-robots.com/?page_id=611